I should warn you off the start – this one is going to be light and airy and maybe bittersweet. Something you can laugh with while reading about your favorite college basketball team. I’m not deep diving into analytics. I’m not going to be scheming, telling you each matchups strengths and weaknesses. If you want that, go to the real professionals.

Today, we’re going to preview the road to the Final Four for the Illinois Fighting Illini. And I think this team and coaching staff would tell you the season would be a disappointment (at this point) if they didn’t make it to the Final Four. Not that they wouldn’t be happy with their accomplishments, but this is a dream big, win big program. If they get beat before the Final Four, we will look back in 10 years and still talk about ‘what could’ve been,’ because this team truly has the talent, depth, and experience to win a National Title. So, let’s look at that road to the final four…

This is the only guaranteed matchup of the tournament. And I just want to mention this game solely so I’m not the guy that looks past a 1/16 matchup in case something awful happens, and we become the next Virginia. You know, living my formative years during the John Groce era has truly made me the most pessimistic fan of all time. Thankfully, this team is giving me that confidence back that I once had and currently need.

We opened as 21-point favorites (ILL -21) and it could be worse than that for the Dragons of Drexel. I’m hoping these guys get it done in the first half and no one gets injured. On to the next round where things quickly get interesting.

Why am I just learning that Sister Jean is going to be in the audience?? This is horse sh*t. Excuse my language Sister, but my Lord! The one year my team is amazing, and we have to take on God in the second round? Not very fair.

Sorry Georgia Tech but if a representative of Jesus Christ affects the chances for the #2 team in the nation advancing to the Sweet 16, then you have no chance from the start. We’ll be seeing Cameron Krutwig (Illinois grade-transfer if Kofi leaves??) and the Ramblers in the Round of 32.

I don’t like going against God, but the Illini won’t take this matchup lightly. We have penance lined up after we absolutely decimate Loyola. Next year, I hope we don’t get such a hellacious draw. 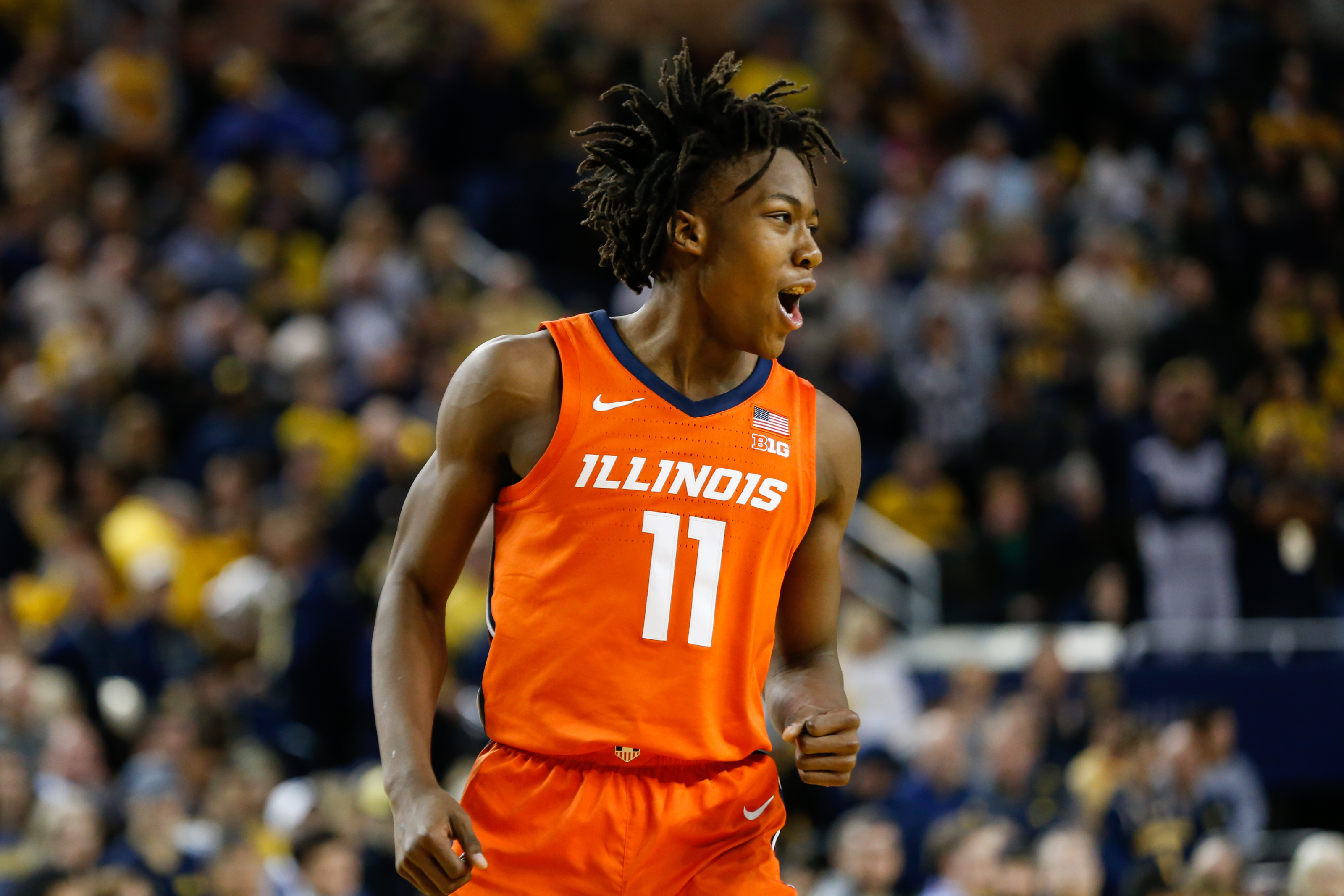 First God, now arguably the best player in college basketball? Unreal. But this is what everyone wants, so this is what I’m going to write about. But for the sake of foreshadowing, I do think Oregon State/Tennessee is a great spot for a 12/5 upset, but the winner doesn’t beat Oklahoma State.

Now, I said I wasn’t going to get into analytics, so I won’t fact check this, but I’m just going to say it. I think Oklahoma State and Illinois had the most Quad 1 wins this season. This is easily the most anticipated matchup of the tournament (before the Final Four) if you’re a fan of star power. Two National Player of the Year candidates in Cade Cunningham and Ayo Dosunmu square off (though I understand Ayo won’t win NPOY, but he is a candidate) in the Sweet 16.

I think Oklahoma State was seeded too high (low? Idk the terminology but the number beside their name could’ve been smaller), given the back half of the year that they’ve had. They could’ve easily flip flopped with #3 West Virginia in the same region. And I’m just going to say this – I’m scared of Cade Cunningham. Not a hot take; just a fact. I’ll admit I don’t know much about the rest of the personnel, but I do know that Oklahoma State beat West Virginia without Cunningham. Kind of like another team that beat Michigan without their star… hmmm.

And I’m not sure if this is another level of the matchup but Brad Underwood obviously coached at Oklahoma State for a year before coming to Champaign. No clue if there’s bad blood there, but I’m sure there’s motivation. Either way, if the B1G was TRULY the best conference in basketball, the Illini will be favored in this matchup, and they should be able to get the job done.

This may sound crazy, but whoever makes it out of the bottom half of the Midwest region, I’m less scared of than Oklahoma State. And I’m not too confident we’ll be seeing #2 Houston in the Elite Eight. I could be wrong, but the bottom half feels like a crapshoot.

I could see us playing Rutgers again, which would be awesome. Seeing Paul Mulcahey cry one more time would be such a rush of adrenaline. Side note: it’s hilarious that his name is Paul. No offense to Paul’s; most of you are named correctly within your generation.

San Diego State is one of the hottest teams in college basketball; they could keep running. But this is the game where you feel Illinois finally gets a really nice draw. We have potentially the weakest #2 seed in our region and a couple weak ACC teams rounding out the field (Clemson and Syracuse). If West Virginia is the team to come out of the bottom half, then we’re in a great spot. A team that lost one of their best bigs simply cannot matchup with us.

If we make it to the Elite Eight, I truly don’t see any team that threatens our Final Four appearance, which scares me, but whatever.

Well we made it. Are we playing Baylor or the field? Teams I could see making it past Baylor: Texas Tech (they’re built for the tournament with a lot of star power) and Ohio State. I don’t think anyone else gets on enough of a heater to surpass Baylor other than these two teams.

Everyone who knows anything about college basketball knows that Illinois is not the same team they were when they lost to Baylor (and Mizzou, ugh) in the nonconference schedule. A rematch would be something this Illini team would LOVE. I hope the world gets to see it. Baylor has shown to be human in the past couple weeks, and Illinois is playing the best basketball in the country right now.

Just a side note – if Illinois does make it to the Final Four, I will be a walking advertisement on how to not cope with stress. I’ll be a mess. From the tip I won’t know how to properly act like a civilized human being. But that’s part of the fun.

All I know is I’m going to try to enjoy it. Even though my emotions get going, I’m going to do my best to sit back and enjoy a once-in-a-lifetime type of team. I want the Illinois basketball program to have sustained success, and I think they will, but who knows if they’ll have this stacked of a team ever again. We’ve waited a long time for this, and I’m trying my best to soak up every moment. As should you.

This team has been a pleasure to watch all season long, and I’m glad to see Illini Nation buzzing again. I remember in 2005 when I was nine years old, I was watching Illinois comeback against Arizona in the Sweet 16. At nine years old you don’t have many ‘defining’ moments in your life, but that was one for me. From that moment I was a huge Illinois fan. That’s what motivated me to attend the University of Illinois, and that cemented the orange and blue into my heart forever.

I know there’s kids out there that will experience the same exact thing if this team makes that type of run again, so let’s have some fun and enjoy this ride. ILL

About Zachary Himmel 5 Articles
Listen, if you’re here to get all the facts, just leave. If you’re here to question what the hell you’re doing clicking on this idiots article, then welcome. Let’s keep it light, let’s have some fun and let’s not bitch at me when my picks don’t hit. I’m also losing money. We’re empathetic here so get off your ass and let’s sweat out some overs together. PS – The B1G is the best overall conference of all time.

Illinois Tournament Disappointment – Illinois Fighting Illini were heading into the Tournament as the 1 seed, but sadly they failed to deliver! […]