The Colorado Avalanche entered the season as the Stanley Cup favorites right in front of the defending Champions, the Tampa Bay Lightning. Ending the season tied with the Vegas Golden Knights with 82 points, the Avs got the first seed because they beat the Golden Knights four out of a possible seven games. With an elite first line, a Norris trophy caliber defenseman, and a Calder trophy finalist goalie, the Avs are going to be a scary team in the NHL Playoffs.

Two years removed from their 2019 Stanley Cup win, the St. Louis Blues finished the season with 63 points and, on a three-game win streak, headed into the playoffs. Unfortunately for them, they have to face the Avalanche, who beat the Blues five out of a possible eight games in the regular season, and they kept up their hit streak against St. Louis by beating them 4-1 in game one of the playoffs.

In their game, one win the Avs stars showed out. Nathan McKinnon went for two goals and one assist, and Gabriel Landeskog went for one goal and two assists. Even their Norris trophy candidate Cale Makar got in on the scoring with one of his own, and with Grubauer doing his thing in net, saving 22 out of 23 shots is a recipe for a playoff win at home. The Avs have dominated the Blues in this series so far, winning game one 4-1 and game two 6-3. Both games they covered a -1.5 spread.

The Avalanche came into the Stanley Cup playoffs as favorites to win the whole thing, and they’ve looked the part so far. Nathan Mckinnon had a hat trick in game two to go along with two goals in game one to bring his playoff total to five goals in just two games. The Avalanche are doing what most people expected them to do, continue their regular-season dominance in the playoffs as they’ve scored 10 goals as a team in two games, and McKinnon has half of them. If the Blues can’t figure out how to stop Nate and Gabe Landeskog, this series is going to be over by Sunday, and Colorado will move on unscathed. 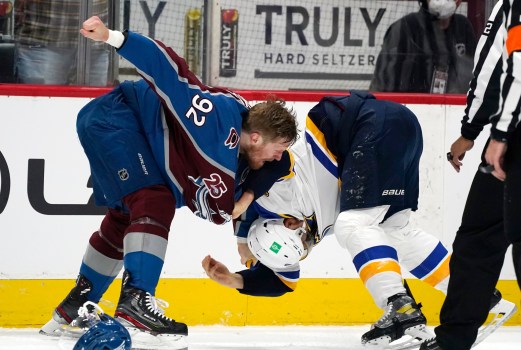 The Blues stayed afloat just long enough for their Russian superstar sniper Vladimir Tarasenko to return for the final stretch of the season. The only thing the Blues have going more than the Avs is that most of their roster in this year’s playoffs were on the roster for their Cup run in 2019, and experience goes a long way. The biggest hiccup the Blues need to get over is the Avalanche Goalie Philipp Grubauer, who is now 5-1 against the Blues this season, including the 4-1 game one victory on Monday night.

The Blues also wanted the NHL to suspend Colorado’s Nazem Kadri, saying that the Avalanche center’s hit on St. Louis defenseman Justin Faulk was very dangerous and career-threatening. The hit happened at 6 minutes and 30 seconds of the third period, where Kadri cut Faulk across and hit him in the head.

Vegas sportsbooks have opened the odds with the Avalanche favored by 1.5 goals with the over/under set at 5.5.

Reds vs Padres Preview and Pick

The Padres host the Reds on Saturday night. San Diego has won both games of the Reds vs Padres series, and playing on the road hasn’t been kind to Cincinnati. […]

With sports gambling becoming legal in more states, the proliferation of sports fans participating in daily fantasy sports has increased too. […]