Will Buffalo quarterback Josh Allen play Sunday against the Minnesota Vikings? How bad is his injured elbow? We don’t know the answer to those questions.

NFC North fans are salivating over the Minnesota at Buffalo showdown Sunday, a game between division leaders that matches teams with a combined 13-3 record. But there’s a dark cloud hanging over the game. Josh Allen, the Bills’ superstar quarterback, suffered an elbow injury in his passing arm last week in a loss to the New York Jets.

He said at midweek that he’ll be ready to play against the Vikings, but Bills coach Sean McDermott wasn’t as optimistic, saying Allen’s status is “day-to-day.” So which is it? Stay tuned. What’s certain is the Vikings’ penchant to win close games this season.

That’s quite a turnaround. 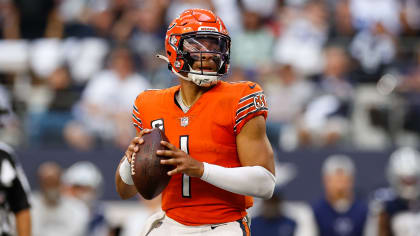 Elsewhere in the NFC North: Can Detroit’s suddenly stingy defense shut down Chicago quarterback Justin Fields on Sunday? While it’s way too early to declare Fields the best running quarterback in the NFL as some Bears fans are doing, you can’t ignore what he did last week in a 35-32 loss to Miami. His 178 rushing yards set an NFL record for a quarterback in a regular-season game, beating Michael Vick’s 173 yards for Atlanta in 2002 in a Falcons’ win over Minnesota.

On the flip side, Chicago’s defense, which took a hit from the trades of Robert Quinn and Roquan Smith the last couple weeks, was shredded by Miami quarterback Tua Tagovailoa. He went 21-for-30 through the air for 302 yards and three touchdowns. Lions quarterback Jared Goff is no Tagovailoa, so the Bears’ defensive weaknesses shouldn’t be exploited as much this week.

Green Bay is a train wreck. The Packers have lost five straight for the first time since 2008, when Aaron Rodgers was in his first year as Green Bay’s starting quarterback. Rodgers was intercepted three times last week in the Packers’ 15-9 loss to the Lions, matching a career worst, and he’ll be facing a much better defense Sunday when Dallas comes to Lambeau Field.

The first game of the weekend is the battle of the Bays. Tom Brady vs. Aaron Rodgers. Buccaneers vs. Packers. Let’s get rolling with this NFC Championship betting preview. […]